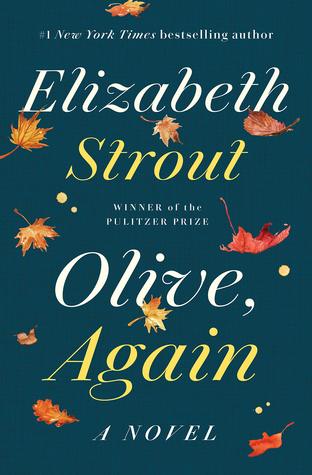 She’s back! Elizabeth Strout’s protagonist, Olive Kitteridge, that cantankerous curmudgeon from Crosby, Maine, returns with a series of poignant scenes from life in the small coastal village. Olive’s older now, and has mellowed somewhat. But she’s still very much Olive.

This is a wonderful reflection on aging, and on taking stock of our lives. Each chapter is like a short story. We jump forward through the span of Olive’s last years. Her marriage to longtime Crosby resident, Jack Kennison. Then widowhood, for a second time. Coming to terms with her growing frailty. And in the background, always the question, what was the point? Strout uses Olive’s sharp observations to nail scenes so powerfully that you’re left gasping, or teary-eyed.

Two of the chapters resonate particularly, The Walk and The End of the Civil War Days. In the former, Denny Pelletier walks home on a cold December night. The rhythm of his steps throws him into a meditation on his life. It seems he is worried about how his children have turned out. But that’s just where his meditation begins. As Danny nears his home, the realization dawns that it is not his children at all. “It was himself about which something was wrong. He had been saddened by the waning of his life, and yet it was not over.”

The End of the Civil War Days tells the story of Fergus and Ethel McPherson, an older couple who have not spoken to each other for 35 years. Their house is divided by yellow duct tape into “his” and “hers” sections, with the tape even splitting the dining room table in half. They communicate with each other through their dog, Teddy. “Teddy, I guess we’ll go to the grocery store,” Fergus says. “I hope to heck Fergus doesn’t forget the milk,” Ethel responds. How can this sad state of affairs end meaningfully? It does. It’s beautifully done.

But all of the chapters are good: funny, touching, sad. Just right. Strout’s writing is spot on. As Jack Kennison says in the opening chapter of the book: “Dear Olive Kitteridge, I have missed you…”

Elizabeth Strout was born and raised in Portland, Maine. Her novel, Olive Kitteridge, won the 2009 Pullitzer Prize for Fiction. Her 2016 novel, My Name is Lucy Barton, reached the top of the New York Times bestseller list. Strout lives in Brunswick, Maine.