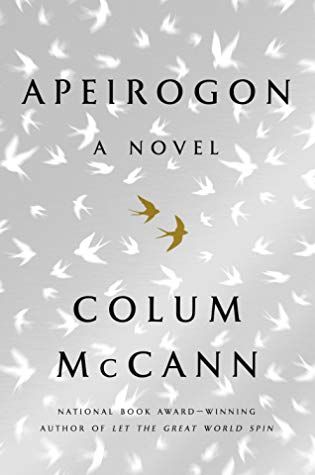 Apeirogon n. (Geometry) A polygon with a countably infinite number of sides.

This seems like a contradiction, but it’s an apt name for Colum McCann’s latest book, based as it is on the lives of Bassam Aramin and Rami Elhanan. Bassam is a Palestinian Muslim; Rami, an Israeli Jew. What could these men possibly have in common? They share tragedy: Both Rami and Bassam have lost a daughter to the Middle East troubles. Rami’s daughter, Smadar, was killed by suicide bombers. She was 13. Bassam’s daughter, Abir, was shot by an Israeli patrol. She was just ten years old.

Bassam and Rami are both members of the Parents Circle, a grassroots organization of Palestinian and Israeli parents who have lost a child to the ongoing Arab-Israeli conflict. Rami and Bassam’s group meets once a month to talk, share ideas, and offer support.

But Apeirogon goes way beyond Bassam and Rami’s lives. McCann’s juxtaposition of snippets of information, of seemingly random facts, scenes and stories, is rich and captivating. Here’s one snippet, offered just after a scene involving a grenade attack:

“The Hebrew word for pomegranate, rimon, is also the word for grenade. It was, according to some Biblical scholars, the forbidden fruit in the Garden of Eden. It is said to consistently have 613 seeds, corresponding to the number of commandments in the Torah.”

There are 1001 such carefully-crafted sections, including a visit with amicable numbers, and a man walking a tightrope for peace. Picasso’s dove of peace makes an appearance, and the Dead Sea scrolls are discovered. This is a truly profound novel. Its depth and scope are incredible. McCann has drawn on the whole of human history to craft this masterpiece with its infinite nuances.

Why 1001? One Thousand and One Nights, that classic collection of Middle Eastern folk tales, was Abir’s favorite book.

Colum McCann was born in Dublin. He lives in New York, where he is a Distinguished Professor of Creative Writing in Hunter College’s MFA program. He won the National Book Award for his 2009 novel, Let the Great World Spin. His books have been published in 35 languages.